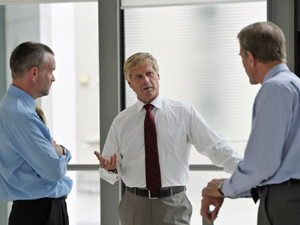 The notion of the “servant leader” conveys the important idea of the leader serving the people he or she leads. That’s a useful shift in perspective from the more traditional idea of leader as master and the led serving the leader.

But perhaps servant leader isn’t quite right either…

The idea that the leader has a lesser status than those she leads may cause other difficulties. The real art is leading without status either way. Abraham Maslow said that the most successful (Self-actualizing) people are not invested in power over others i.e. they are uninterested in status. That’s the most sustainable approach in the long run and the only one available when we have no explicit authority.

Seeking status above those we seek to lead won’t work well for us in the long run, but neither will appearing to place ourselves beneath them.

Status-free leadership is the better goal.

How much is status a feature in your working life and what perspective do you take on it?