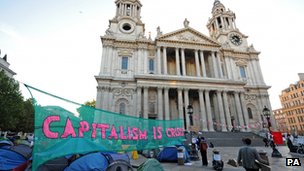 The protestors have achieved a great deal of publicity. Some of them, without intending to, have caused a religious institution (St Paul’s Cathedral in London) to lose its balance (about whose side it’s on), with senior figures resigning.

The protestors are unclear about what exactly they want. Some lobbyists for the other side (the financially greedy, as the protestors see it) ask us to dismiss the protests because “they have no clear demands; no alternative to offer.”

The lobbyists see the situation as a negotiation: “Tell us what you want and we’ll give up some of what we have” (but largely carry on as before).

When someone says they don’t like what we’re doing, it is tempting to say “what do you want me to do instead?” and make a negotiation out of it.

But really we’re getting feedback, and it’s up to us to change our behavior when someone says they don’t like it. That’s the only way to grow as a person.

If we want to be accepted (by ourselves as much as anyone else), WE need to work out what to do with the feedback.

We imagine the targets of the Occupy protestors’ ire care nothing about being accepted. Do you think that’s true?

At St Paul’s, it seems to be taking someone of the Bishop of London’s wisdom to bring stability to the situation. (Dr Richard Chartres impressed many with his address at William and Kate’s wedding.)

So what’s different about the Bishop?

Well, I suggest he has a particular balance that comes from dealing with opposing ideas and reconciling them, and, I suspect, accepting feedback.

How do we know this?

Because Dr Richard has a certain charisma, a presence; and these two things go together: reconciling opposing forces within ourselves increases our appeal to other people. Do this as a lifelong effort and you have a person with the personal authority of the Bishop of London.

And that’s why feedback is best just accepted, and not negotiated away.

And why reconnecting the financial and the ethical will work out well for those that most need to.