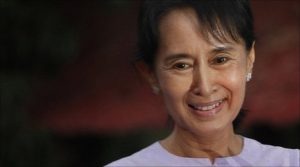 How is it that the Burmese generals with access to so much military might fear Aung San Suu Kyi – a slight 65-year woman? OK, so their fear has diminished enough for her to be released, for the moment anyway, but still she enjoys tremendous popular support at home and abroad. Why?

And how is this relevant to the more mundane?

Joseph Jaworski has something to say about this in his book Synchronicity, where he quotes Francisco Varela (coauthor of The Tree of Knowledge and The Embodied Mind) in talking of “a commitment that can only come from someone who has changed his (or her) stance from resignation to possibility. We need to learn how to internalize that capacity.” Varela went on: “When we are in touch with our ‘open nature’, our emptiness, we exert an enormous attraction to other human beings. There is great magnetism in that state of being which has been called ‘authentic presence’.”

Jaworski adds that Varela warned “There is great danger if we consider these people to be exceptional. They are not. This state is available to us all.”

We frequently think of commitment as being to do with level of effort, about how much we do. Jaworski makes clear that he learned commitment is more about being – a choice of state.

So Aung San Suu Kyi’s authentic presence is as potent as the Burmese generals’ military might – a principle as relevant to the everyday as to the achievement of democracy in a benighted country.

As the comittee chairman for the Nobel Peace Prize said “an outstanding example of the power of the powerless” http://www.bbc.co.uk/news/world-asia-pacific-11685977.